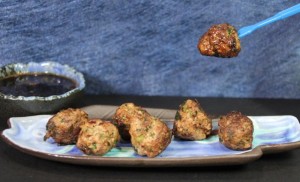 My life has been so busy lately that I feel lucky if I get to eat a meal, and getting to sit down to eat it would feel extra luxurious. Except for dinner, I always with sit down with the family for that. Often I go weeks without having a moment to check out some of my favorite cooking blogs, as was the case on Monday when I finally took a moment to visit Smitten Kitchen. I’ve always loved her site, and her recipes always work. When I got on the other day, I printed out 3 of the first 4 recipes I scrolled through, and I am proud to say that less than 48 hours later, I had made all 3 and they all were terrific. I’m starting with this recipe for no particular reason.

As I was assembling the ingredients for this I realized I had a bit of a brain lapse while in the grocery store. I was standing there looking at the ground turkey that the recipe called for and was just getting so grossed out at the way it looked, that I wandered over to the ground pork and decided that, this being an asian-style recipe, using half turkey and half pork would probably be an interesting and appropriate substitution. But, when I was gathering my ingredients today I pulled my ground pork and ground beef out of the fridge — I accidentally bought ground beef instead of the ground turkey; I guess I really do have an aversion to it. So I used 50% ground pork and 50% ground beef, and they tasted great. If you’ve got a similar aversion, you can substitute the same. I’m going to write the recipe exactly as I used it, but the original recipe called for 1 pound of ground turkey. Deb had reduced the cilantro and ginger from what was originally called for. I increased mine a bit, since I adore both ginger and cilantro. You can use less if you prefer. I also reduced the dipping sauce down significantly so it would really cling to the meatballs.

Original recipe from Smitten Kitchen, who adapted it from Canal House Cooking, vol. 3

Note: This recipe is gluten-free if you use a soy sauce that is labeled gluten free. There were many options on the shelf at the store.

Yield: The original recipe suggest 24, Smitten Kitchen got 34, and I got a whopping 51 meatballs, but I happened to have a tiny ice cream scoop that measures exactly 1 tablespoon that I used, so my meatballs were very uniform in size.

Make sauce:  Bring sugar and water to a boil in a small saucepan over medium-high heat, stirring until sugar melts completely. Reduce heat to a medium-low and add soy sauce, mirin, ginger, coriander and peppercorns. Simmer, stirring occasionally, until reduced by half, about 30 minutes, though this took me a bit longer to reduce it until it was syrupy enough that I thought it would coat, and not just dribble off the meatballs. You can keep it on a back burner, stirring it frequently, while browning the meatballs in the next step. Once it has reduced to your satisfaction, strain through a sieve (I actually chose to not strain the sauce, but go ahead and follow the recipe.) 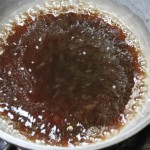 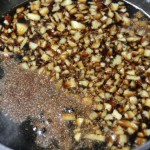 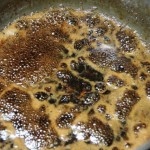 Make meatballs:  Mix ground pork and beef (or turkey), scallions, cilantro, egg, sesame oil, soy sauce and several grindings of black pepper in a bowl. You can mix the meatballs with a fork; it seems to work the ingredients into each other well, but growing up making swedish meatballs, I always use my freshly washed hands to mix my meatballs. 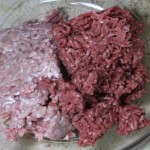 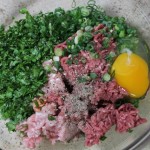 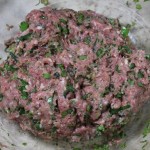 Roll tablespoon-sized knobs of the mixture into balls. I used a tiny ice cream scoop that I have, and first scooped all the meatballs and then I rolled them with slightly wet hands. The mixture is pretty soft, so you can try rolling them, or gently toss the meatballs from palm to palm until they’re roundish 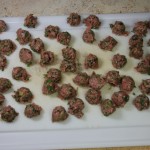 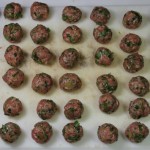 In a skillet over medium-high heat, generously cover bottom of pan with vegetable oil. Working in batches to avoid crowding, place meatballs in pan and cook, turning, until browned all over and cooked inside, about 8 minutes per batch. I drained mine on a paper towel slightly before putting on a serving plate. 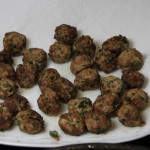 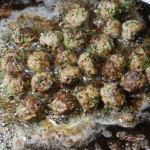 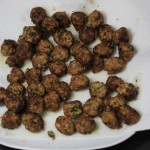 Arrange on a platter (a heated one will keep them warm longer), spoon a little sauce over each meatball, and serve with toothpicks. Alternatively, you can serve the glaze on the side, to dip the meatballs. 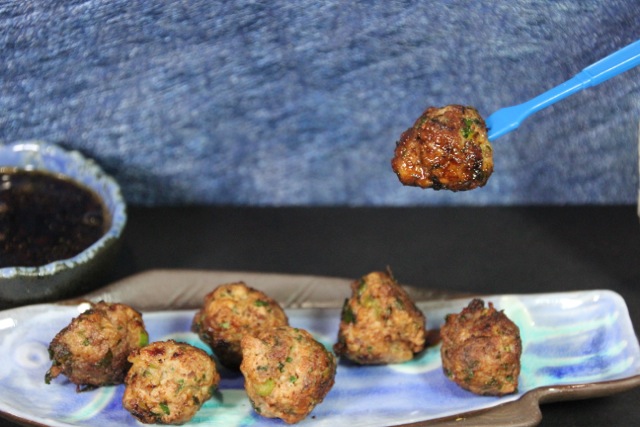 Do ahead: The sauce can be made up to 2 days in advance and refrigerated until needed. If needed, you can rewarm or keep the meatballs warm in a 200-degree oven until ready to serve.