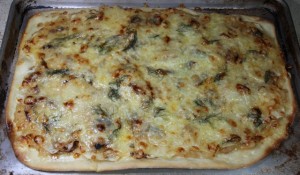 You might have read about the amazing meal my sister and I had recently at Leon’s Full Service in Decatur, Georgia. One of the appetizers I had (that’s right folks, I had more than one), was a flatbread with apple butter, grilled fennel, apple slices and cheddar cheese. It was amazing. Sweet and savory. Unexpected. Delicious. I was worried that it would taste like anise, but the grilling must do something to the fennel, because it just gave the pizza a wonderful flavor and a little crunch.

I set out to re-create this while on vacation in Wyoming with Amanda’s help. I decided I wanted to try a pear butter instead of an apple butter. This was purely aesthetics on my part; I didn’t like the dark brown colors of the apple butter I was finding at the stores, but I came across a beautiful pear butter. 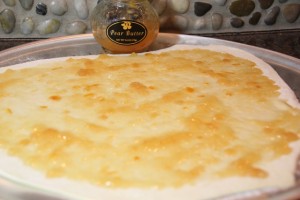 Of course when I went to make it here at home for this post I couldn’t find any pear butter, so I had to make my own. It was easy and really delicious. I put the seeds from 1/2 a vanilla bean in a heavy, non-reactive pot with some seeded, roughly chopped peeled ripe pears and a little apple cider and reduced, mashed, reduced, and reduced some more until almost all of the liquid evaporated. I did not add any sugar as it was for this savory pizza and my pears were nice and ripe, but if I were making it to preserve it, I would have added some sugar. I would only make your own if you can’t find it in the stores ready-made or if you’re planning on making a bunch to can at the same time. 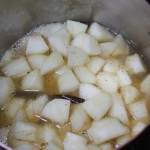 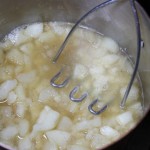 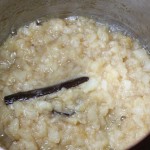 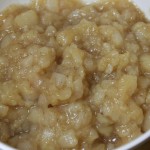 Now the dough was interesting. I found the recipe from Bobby Flay on Food Network’s website. Lots of the people that left comments noted that the dough was very wet. When I made the dough in Wyoming (altitude of 6329 feet), and I made it twice, the dough was absolutely perfect; not too wet at all. When I made the dough in Connecticut (sea level), the dough was almost too dry and hard. It was fine after it rose, but I did consider adding some liquid back into it when I first finished it. My point here is pay attention when you’re making it. It was a lovely dough though and easy to work with and roll out. I’d recommend it for any pizza or flatbread recipe.

Mix water and yeast in a large bowl and let stand 5 minutes to proof. Gradually pour in 2 cups of the flour and stir to incorporate. Mix for about 1 minute to form a sponge. Let stand, covered, for at least 1 hour. 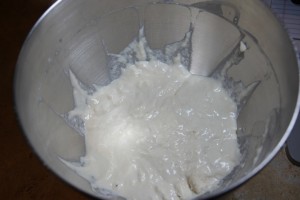 Put sponge in the bowl of a stand mixer. Using the dough hook, add the salt and oil, then add the flour, 1/2 cup at a time, to form a dough. Remove from bowl and knead. Place in a clean oiled bowl and let rise, slowly, about 2 1/2 hours. Divide dough into 4 balls, let rise again for 1/2 hour, and then roll out as desired. 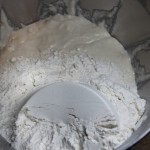 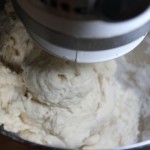 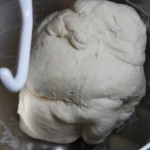 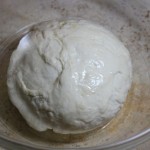 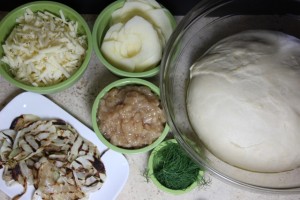 Mis en Place. I, of course, forgot the walnuts.

You can cook your pizza on a pizza stone if you have one (put it in the oven before you pre-heat your oven), or on a metal pizza pan, or just on a baking sheet as I did. Dust the pan lightly with cornmeal to prevent sticking. If you are using a pizza stone, then turn a baking sheet over and dust the underside of the pan with the cornmeal. You can easily slide the pizza off the back of the pan onto the heated pizza stone from there. Preheat the oven to 475o F. Allow oven to preheat completely before putting pizza in.

Once your flatbread dough is ready, and depending on whether you want two large flatbreads or 4 smaller ones, (or you can save and freeze some of the dough to use another time), divide your dough. On a lightly floured surface roll out dough until thin. Move dough to prepared pizza pan.

Spread a thin later of the pear butter over the entire pizza crust using an offset spatula, leaving the edges clear. 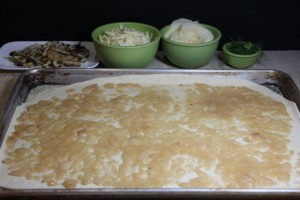 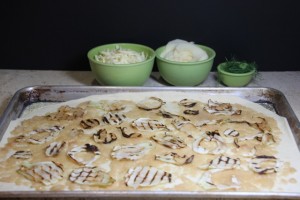 Now of course I forgot the walnuts this time, but don’t you forget them, because they add an important flavor to the pizza! I have a picture of that part from one of the Wyoming pizzas. 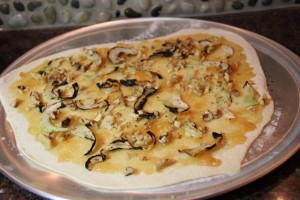 Then evenly distribute the apple slices around the pizza. 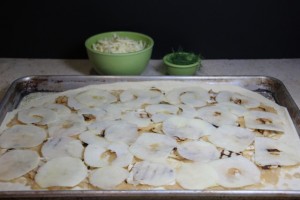 Sprinkle the cheddar cheese around just short of the edge of the pizza. 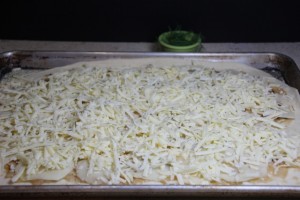 And finally add some of the tender fennel greens around on top of the cheese. 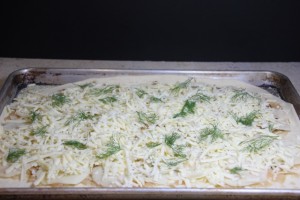 Put pizza into preheated oven (or slide off pan onto pizza stone), and bake until cheese is just beginning to brown a little, about 6-12 minutes. This time will vary a lot on pan or pizza stone and individual ovens.

If you’re in the mood to try something a little different, you’ll be pleasantly pleased with the outcome of this pizza.