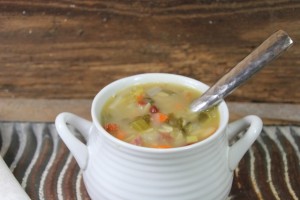 I was in the mood for soup on Thursday, and found this recipe on my favorite go-to recipe site, Cook’s Illustrated. I did change quite a bit from the original recipe, but it was a great launching pad for recipe creativity. I’m not a big cabbage fan, so I substituted kale instead and doubled the called for carrots and celery. I also wanted to make it more of a meal, so in addition to increasing the bacon slightly, I also added 8 oz. of chopped kielbasa to the soup. And I don’t care what anybody says about flavor; I think that gelatinous juice that canned beans are in is nasty. I rinsed and drained mine before adding to the soup. I was afraid that the soup wouldn’t have enough flavor with just using water as the base, so I eliminated some of the water and substituted 26 oz. of chicken broth instead. I wasn’t sure what to think of the cinnamon called for, but I used it. I can’t say I tasted it, but you’re free to use it or eliminate it. Although the original recipe called for only white pepper, I also added about ½ teaspoon of freshly ground black pepper.

Don’t grate your potato until just ready to add it to the soup or it will discolor quickly. Adding the pasta to the pot last, when just about ready to serve, helps it hold onto its bite. 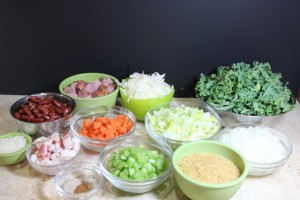 Instructions
Brown the bacon in the olive oil in a large soup kettle or stockpot over medium heat. When it’s beginning to get brown add the sliced and quartered kielbasa and continue to cook, stirring frequently until the bacon has finished cooking and the kielbasa is a bit browned. 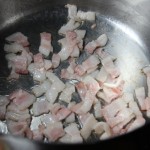 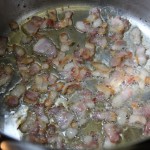 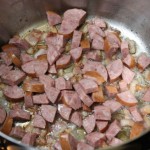 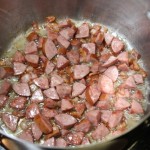 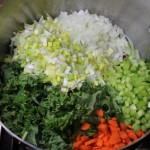 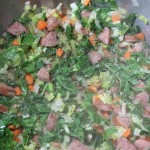 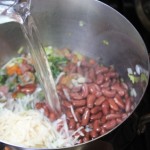 Add orzo, reduce heat to low, and simmer until orzo is tender, 7 to 8 minutes. If you find soup is too thick, you can thin it with additional chicken stock or water. 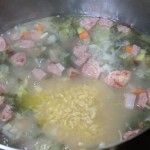 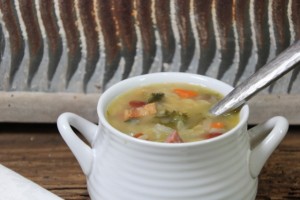