I love this dessert. I originally posted it on craftyfarmgirl.com last year, but I made it last night and thought it deserved to be posted again. I first had this dessert at Paul Newman’s restaurant The Dressing Room, which reflects Paul Newman and chef Michel Nischan’s mutual commitment to neighborly hospitality, local, natural and organic ingredients and regional American heirloom food. My friend Susan had taken me there to celebrate my birthday. The dessert I had was this Naughty Angel. An almond-scented angel food cake which is pan fried. They served it with vanilla ice cream and Andrew’s Local Honey drizzled over it all. I couldn’t get home fast enough to try and make this myself. It’s such a simple concept, yet somehow elevated to a new level with the pan-frying of the cake and the addition of the honey. 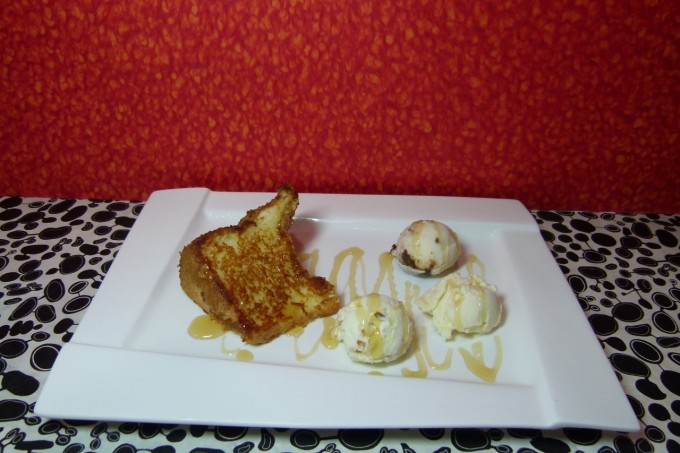 What’s really nice about this dessert is that you don’t even have to make the angel food cake yourself if you don’t want to. You can buy the cake at a store and it probably will be almost as good. I would not get a really basic discount grocery store kind of angel food cake though – spend a little more time searching out a well-made one. Our locally-owned grocery store in town, Palmer’s, has a fabulous angel food cake in their bakery that would be great for this.

In the few years since I first had it Andrew’s Honey has grown and can now be found on the shelves of most grocers I go in to. At that time not only was Paul Newman still alive, but the only place to get this artisinal honey at the farmer’s market in Westport. I can’t help but wonder how artisinal his honey can be if it’s now being mass-produced for every grocery I go in. Finding some special artisinal honey is definitely worth it though for this dish. Please do not put Sue Bee on this or anything in a plastic bear — It’s part of that elevation thing I was talking about.

First, stick the plates you’ll be serving the dessert on in the freezer. This will allow you a lot more “working” time as you are plating the desserts before everything starts getting all melty on you.

Slice the angel food cake into individual serving sizes. Angel food cake slices best with a serrated knife, or you’ll get even neater slices if you use an electric knife. 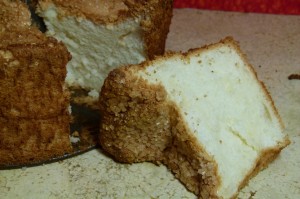 Put a large skillet (or two, depending on how many servings you’re making) on a medium-low heat on the stove and allow it to heat up. Meanwhile, butter both sides of the cake with the softened butter. 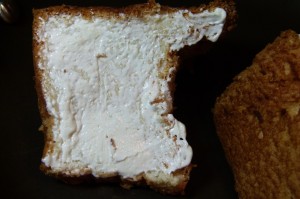 Take the ice cream out of the freezer to soften up a bit while you are browning the cake.

When the skillet is hot, place the cake slices in the pans and cook until nicely browned on one side. Check as you are cooking to make sure the heat isn’t too high or too low. You want a nice, slow browning to get a little caramelization.

When one side is browned flip them over and brown the other side. 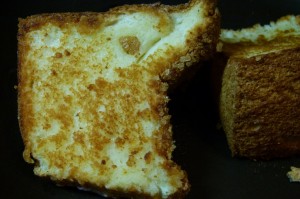 While the second side is browning, take your plates out of the freezer and lay them out on your work surface.

When both sides are browned plate the slices on the individual plates. Quickly scoop the ice cream onto the plate, then drizzle both the cake and the ice cream with a very generous spoonful of honey. Serve immediately. 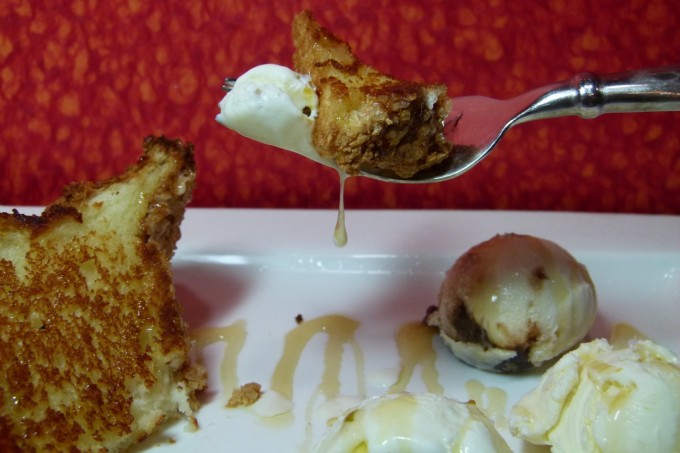 I’m not going to show you the step-by-step for the angel food cake here because I’ve already done it quite nicely on craftyfarmgirl.com. Click the link to see the step-by-step directions there. However, since I did take the photos yesterday (not realizing what a fine job I’d done the first time), I will show you the best shot of the bunch just because I want to. 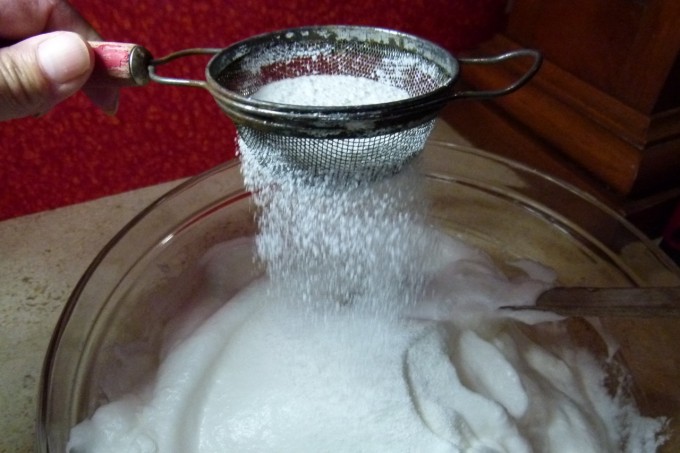 WHY THIS RECIPE WORKS:
To get an angel food cake recipe for a tall, perfectly shaped cake with a snowy white, tender crumb encased in a thin, delicate, golden crust, we experimented with egg whites, finding no discernable difference in volume between whites beaten at 72 degrees and those taken straight from the refrigerator. What we found key to creating a stable foam for our angel food cake recipe was the speed at which we beat the egg whites, starting at low speed just to break them up into a froth and increasing the speed to medium to form soft, billowy mounds. When large bubbles stop appearing around the edges, this is the point the sugar should be added, a tablespoon at a time. Once all the sugar is added the whites become shiny and form soft peaks when the beater is lifted. This is just right for making the perfect tall, light yet firm angel food cake.

Sift both the cake flour and the granulated sugar before measuring to eliminate any lumps and ensure the lightest possible texture.

If you have a kitchen scale, use it for this recipe. Measuring cups can be drastically off. When baking, if there’s a weight along with a measurement I will always use my scale for the most accurate results.

Adjust an oven rack to the lower-middle position and heat oven to 325 degrees. Have ready an ungreased large tube pan (9-inch diameter, 16-cup capacity), preferably with a removable bottom. If the pan bottom is not removable, line it with parchment or wax paper.

In the bowl of a standing mixer, or with a handheld mixer, beat egg whites at low speed until just broken up and beginning to froth. Add cream of tartar and salt and beat at medium speed until whites form very soft, billowy mounds. With the mixer still at medium speed, beat in 3/4 cup sugar, 1 tablespoon at a time, until all sugar is added and whites are shiny and form soft peaks. Add vanilla, lemon juice, and almond extract and beat until just blended.

Gently scrape batter into pan, smooth the top, and give pan a couple of raps on the counter to release any large air bubbles.

Bake until the cake is golden brown and the top springs back when pressed firmly, 50 to 60 minutes.

If cake pan has prongs around the rim for elevating the cake, invert pan onto them. If not, invert pan over the neck of a bottle or funnel so that air can circulate all around it. Let the cake cool completely, 2 to 3 hours.

To unmold, run a knife around edges, being careful not to separate the golden crust from the cake. Slide cake out of pan and cut the same way around removable bottom to release, or peel off parchment or wax paper, if used.

Place the cake, bottom-side up, on a platter. Cut slices by sawing gently with a serrated knife. Serve the cake the day it is made if possible.