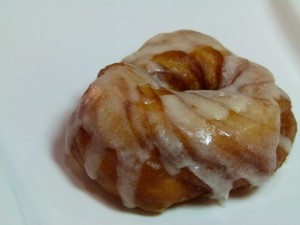 My kids have been bugging me lately to make fresh donuts again, since I haven’t made any in months. For a while I was on a roll, making glazed, chocolate & strawberry frosted donuts, Dinner Party Donut Holes, and New Orlean’s Style  Beignets. I really wanted to try and make French crullers. I’m not generally a huge donut fan, but a good cruller is so light that it’s hard to feel too guilty about eating one.

I found two promising recipes on the internet for them. Both were based on a basic pate a choux recipe, but one had orange zest and used shortening rather than butter in it. While generally I would opt for the butter over shortening, the shortening recipe seemed to be rated higher, so I decided to go with that one. The one thing I did take away from the other recipe that did seem important, was to freeze the donuts once they were piped out for 30 minutes. I tried this recipe twice; once without freezing and once with, and the freezing is key to keeping the soft batter from completely losing it’s shape when trying to transfer them into the fryer.

Put 4 tablespoons sugar, salt, shortening and orange rind in saucepan with 1 cup hot water. Bring to a boil. Mix in 1 cup of flour. Reduce heat to low and, with a wooden spoon, stir in the flour until the mixture forms a ball, working out any lumps of flour from dough as you go. Remove from heat, and cool slightly. 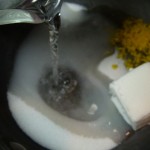 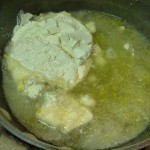 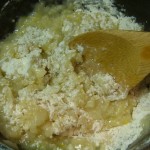 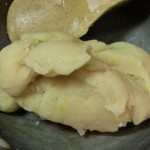 Beat in one egg at a time, beating each one in thoroughly before adding another. Working the eggs into pate a choux dough is a good arm workout, but doing it by hand, and always with a wooden spoon, is the way I grew up making it. You can transfer the dough to a heavy-duty mixer at this point and work the eggs in, still one at a time, with the beater attachment, working each egg into the batter individually and just until combined. 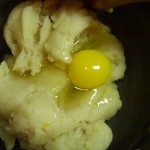 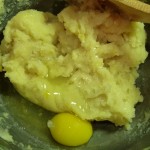 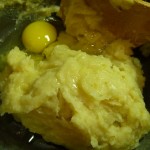 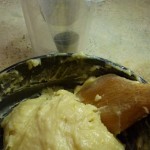 Using a star tip, press dough through pastry bag, in desired shape, onto a well-greased square of heavy paper. (Note: I used parchment paper, and next time I will try cutting up a brown grocery bag and greasing that, as I think it might release the donut batter into the oil easier than the parchment did.) Place the piped donut batter into the freezer for 30 minutes. 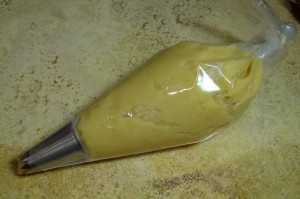 The donut batter in the pastry bag ready to pipe. 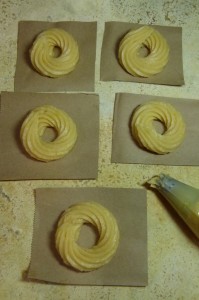 pipe into circles on squares of greased heavy paper and freeze for 30 minutes.

While your donuts are in the freezer you can bring your oil up to the proper temperature. Turn paper upside down and let crullers drop into deep, hot fat (375 degrees F – 190 degrees C). Fry until well puffed up and golden brown in color, about 6 to 7 minutes. Drain on unglazed paper. Ice with confectioners’ frosting. 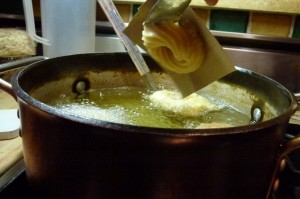 Using a knife, carefully scrape the batter off of the paper and into the hot oil. 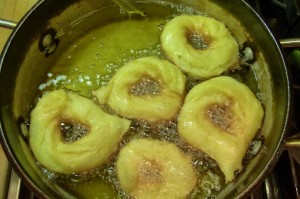 Fry until well puffed and golden brown on each side. 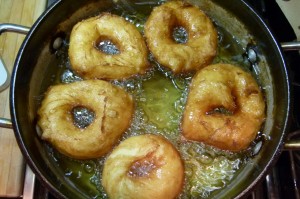 When brown on both sides, remove with tongs or a slotted spoon and drain on unglazed paper. 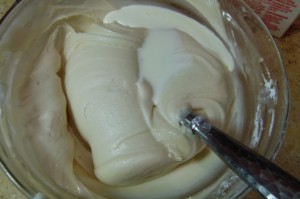 Prepare icing and drizzle on with a spoon or smear on with a knife. 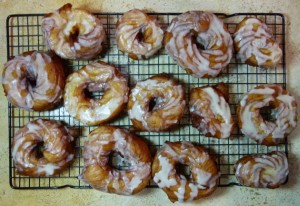 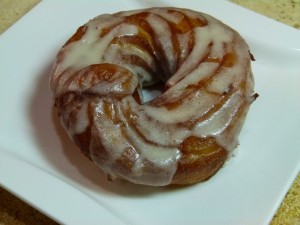