My friend Susan told me about some cupcakes she’d had recently. Chocolate cake with coconut frosting and a chocolate glaze. She knows me well enough to know that I would try and re-create them on my own. Unfortunately I didn’t have time to bring some over to her before I left for Texas to see if I’d done the originals justice.

I’m not going to give a lot of details on the recipes as they are pretty straightforward. I chose this devil’s food cake recipe because I’ve used it many times and it consistently delivers a moist, tender, chocolaty tasting cake. You will find details on making the coconut buttercream icing in this previous post. My coconut cake is one of my favorite cakes, but this combination of the devil’s food cake with the coconut buttercream and the chocolate ganache icing really was delicious. 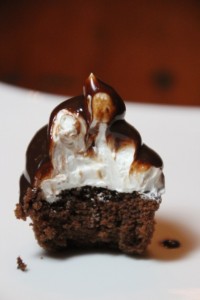 While developing our devil’s food layer cake recipe we found very little difference between cakes baked with standard American cocoa and “Dutched” cocoa. We chose water over milk or buttermilk to moisten our cake batter, discovering that cakes made with dairy had a more muted chocolate flavor.

This cake’s texture is both soft and dense, similar to chocolate pound cake, only softer and lighter. Its flavor is intensely chocolate, yet pleasantly sweet. The substantial coffee-flavored buttercream stands up to the cake’s dense texture and balances the rich chocolate flavor.

Mix cocoa and instant coffee in small bowl; add boiling water and mix until smooth. Cool to room temperature, then stir in vanilla.

Beat butter in bowl of electric mixer set at medium-high speed until smooth and shiny, about 30 seconds. Gradually sprinkle in sugar; beat until mixture is fluffy and almost white, 3 to 5 minutes. Add eggs one at a time, beating 1 full minute after each addition.

Divide batter evenly between cupcake liners, filling about 3/4 full. Bake until they feel firm in center when lightly pressed and a skewer comes out clean or with just a crumb or two adhering, 6-8 minutes. Tranfer pans to wire racks; cool for 20 minutes. Remove cupcakes from pans and place on wire rack. 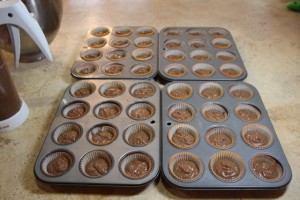 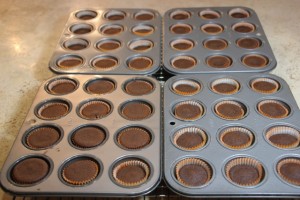 Combine whites, sugar, and salt in bowl of standing mixer; set bowl over saucepan containing 1 1/2-inches of barely simmering water. Whisk constantly until mixture is opaque and warm to the touch and registers about 120 degrees on an instant-read thermometer, about 2 minutes.

Transfer bowl to mixer and beat whites on high speed with whisk attachment until barely warm (about 80 degrees) and whites are glossy and sticky, about 7 minutes. Reduce speed to medium-high and beat in butter 1 piece at a time. Beat in cream of coconut and coconut and vanilla extracts. Stop mixer and scrape bottom and sides of bowl. Continue to beat at medium-high speed until well-combined, about 1 minute. 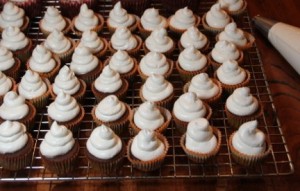 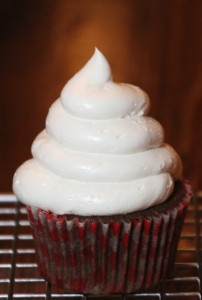 Directions
Bring cream to a boil in a saucepan over medium-high heat. Pour cream over chocolate in a heatproof bowl. Let stand for 2 minutes. Add butter, then whisk mixture until smooth. Let cool a bit, stirring often, as if it is too warm it will melt the buttercream icing, but don’t let it get too cool or it will be too thick.

Holding cupcakes by their liners, carefully dip icing into ganache and gently shake extra off. Replace cupcake on wire rack and let cool. 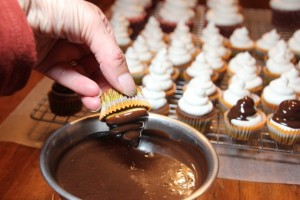 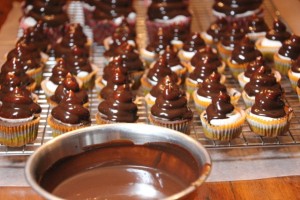 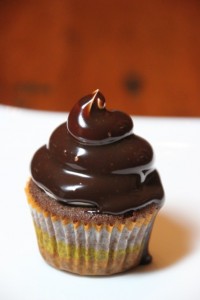 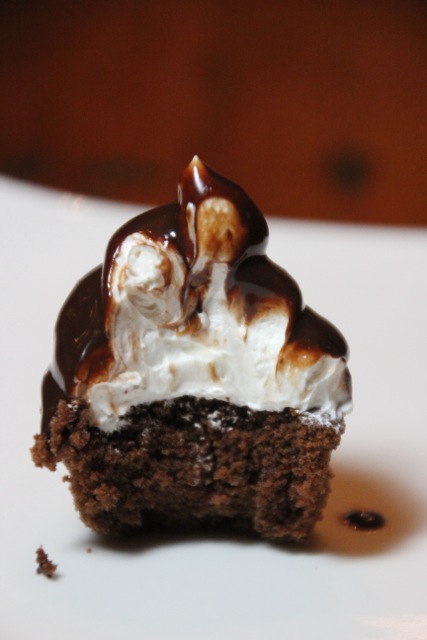