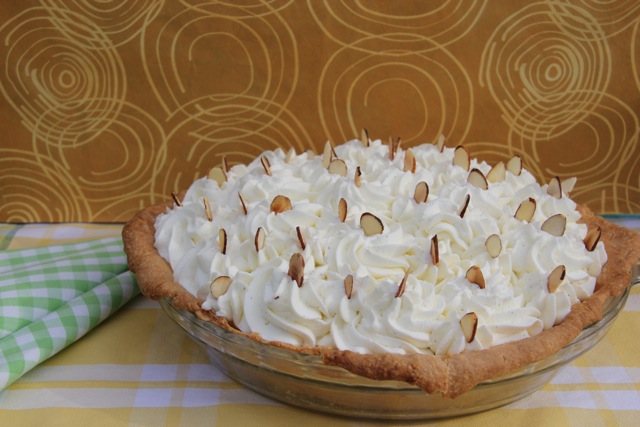 I saw the book Sarabeths Bakery—My Hands to Yours at a bookstore recently and had to have it. It’s a large, beautiful cookbook with lots of classic looking pastries and desserts. I’ve already worked my way through the Croissant Dough and made Pains au Chocolat and Almond Croissants with it that were divine, but when I saw this recipe for Banana Cream Pie I made it that same day.

I have never made a banana cream pie before. What I liked about this recipe was that she added unflavored gelatin and whipped cream to the custard so it wasn’t quite so heavy. I added a pinch or two of cornstarch and cream of tartar to the whipped cream topping so it wouldn’t get weepy. Now her recipe uses a almond pastry crust, and I will put the recipe for that at the  bottom of this post. In the interest of saving time, I used a ready-made crust (I love the one from Trader Joe’s). Next time I will definitely use the almond pastry dough to compare the two.

Recipe from Sarabeth’s Bakery; From My Hands to Yours by Sarabeth Levine. Altered slightly by Crafty Farm Girl, January, 2012

Position a rack in the bottom third of the oven and preheat to 375 o F. Line a 9-inch pie pan with the dough. Pierce the bottom of the dough in a uniform pattern with a fork. Freeze for 15 minutes. Line the dough with some parchment paper or aluminum foil and fill with pastry weights or dried beans. Bake on a half-sheet pan for 15 minutes, until the pastry is set. Remove the parchment paper and the weights and continue baking until the pastry is golden brown, about 10 minutes more. Cool completely. 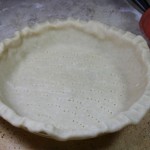 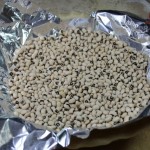 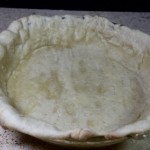 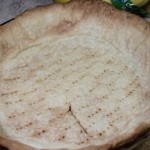 To make the filling, sprinkle the gelatin over the water in a small bowl. Set aside until the gelatin softens, about 5 minutes. Whisk the yolks, sugar, and cornstarch in a heatproof medium bowl until combined; set aside. Place a heatproof bowl with a medium-mesh wire sieve near the stove. 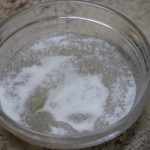 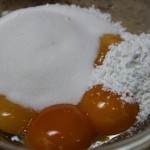 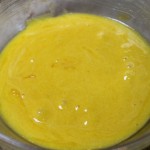 Heat the milk in a heavy-bottomed medium saucepan over medium heat until very hot. I added my scraped vanilla bean and the pod to the milk as I was heating it up. If you are using vanilla extract, wait to add it until directed. Gradually whisk the milk into the egg yolk mixture. Pour the mixture back into the saucepan. Whisking constantly, being sure to reach into the corners of the saucepan, cook over medium heat until the filling thickens and comes to a full boil. Reduce the heat to low and whisk for 1 minute. 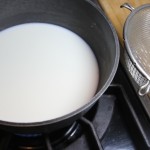 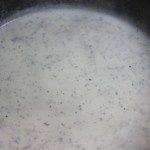 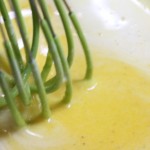 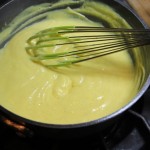 Remove from the heat, add the gelatin mixture, and whisk until the gelatin is completely melted (the pastry cream will thin slightly—don’t worry). Strain through the medium-mesh wire sieve into the clean medium bowl. Stir in the vanilla extract if using. Place a piece of plastic wrap directly on the surface (this discourages a skin from forming), and pierce a few holes in the plastic wrap with the tip of a sharp knife. Let stand on a wire rack until completely cooled and thickened but not set. Remove the plastic wrap and fold in the bananas. (I forgot to cut my bananas in half lengthwise before cutting, but I will do it next time for sure.) 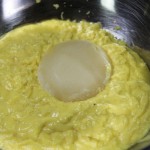 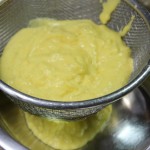 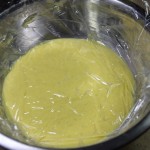 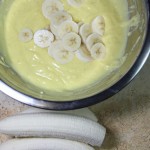 Using a whisk or a handheld electric mixer, beat the cream in a small bowl just until it forms soft peaks. Fold the whipped cream into the banana mixture. Fill the cooled pastry shell and smooth the top. Cover the plastic wrap and let the filling set in the shell in the refrigerator, about 1 hour. 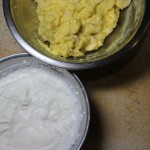 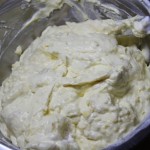 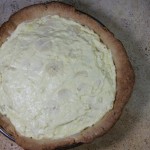 To make the topping, beat the heavy cream, sugar, and vanilla just until it forms peaks. Transfer to a bag fitted with a 3/8-inch diameter open-star tip, such as Ateco #824. Pipe swirls of whipped cream to completely cover the top of the pie. Refrigerate until the pie is chilled, at least 1 hour. Just before serving, top with the toasted almonds. Serve chilled. 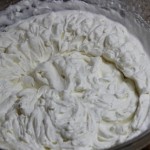 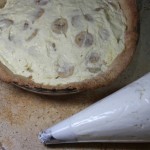 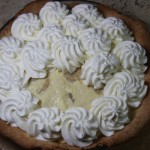 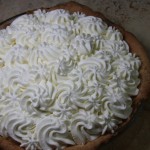 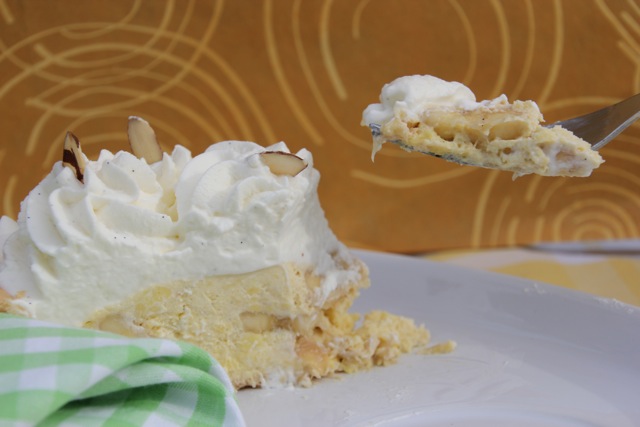 Makes enough for one 9-inch pie

This delicious, buttery crust bakes into a crisp, nut-flavored shell.

Grind the almonds in a coffee grinder with 1 tablespoon of the flour until powdery. Combine the remaining 1-cup flour, the ground almond mixture, sugar, and salt in a medium bowl. Add the butter cubes and toss to coat with the flour mixture. Using a pastry blender, cut in the cutter until the mixture looks like coarse meal with some pea-size pieces of butter, about 2 minutes. Using a fork, mix the egg yolk, 1-tablespoon ice water, vanilla seeds, and almond extract in a small bowl. Drizzle the yolk mixture all over the flour mixture and, using a wooden spoon, combine just until the dough clumps together. If the dough is too dry, add more iced water, a little at a time.

Transfer the dough to a lightly floured work surface and shape into a 1-inch-thick disk. Wrap in plastic wrap. Refrigerate until chilled but not hard, 30 minutes to 1 hour. (The dough can be refrigerated up to 1 day, but it will be very hard, and should stand at room temperature for about 30 minutes before rolling out. The dough can also be frozen, double-wrapped in plastic wrap, for up to 2 weeks. Defrost in the refrigerator overnight.)